“Toro’s service beyond what we expected” 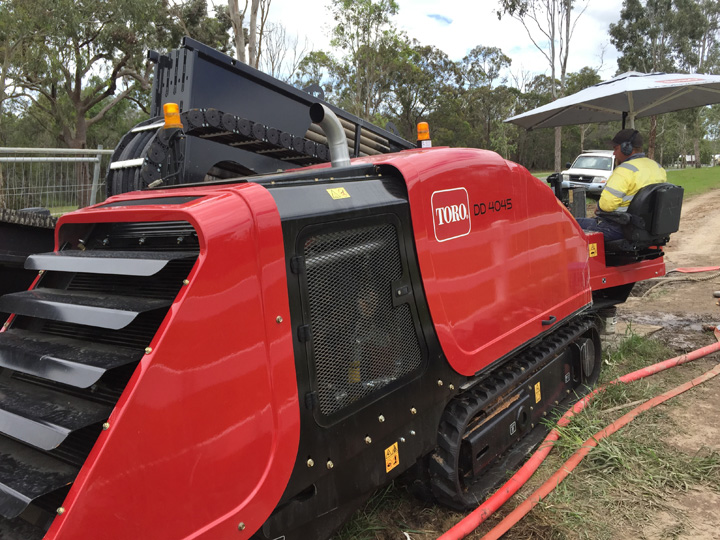 Toro Australia entered the horizontal directional drilling (HDD) market in early 2014 with a strong line of powerful machines. Toro’s expansion into HDD follows the purchase in 2012 of Astec Underground, Inc., a highly regarded manufacturer of directional drills, riding trenchers and other utility equipment, by The Toro Company of the USA, Toro Australia’s parent company.

Shane Crawford, Drill Supervisor at PDR, couldn’t be more pleased with his DD4045: “I have previously used Astec horizontal drills and with all of the improvements to the DD4045 that Toro has made it is now a better machine than it used to be.

“Our Toro’s first drill shot was a large rock job on the Sunshine Coast at Caloundra: a 350mm hole down to a depth of 12 metres and over 180 metres in length.  The Toro drilled through layers of hard bluestone and ‘coffee’ rock with ease! We are currently using the machine to boost our productivity as part of our work on the NBN rollout on the Northside of Brisbane.

“The DD4045 almost seems to be two types of machines into one, it is easy to change between the way you work, single stick or two stick.  There are multiple ways of continuing to work when there is an issue, there is even a ‘life jacket unit’ to support you if the drill ever has an issue.

“Toro has been absolutely great to deal with and has exceeded our expectations from the moment we showed interest. Their price, quality, service and expertise is beyond what we expected.  We have never had support like this, and Steve Timms from Toro knows the machine inside and out and is fantastic to deal with,” says Shane.