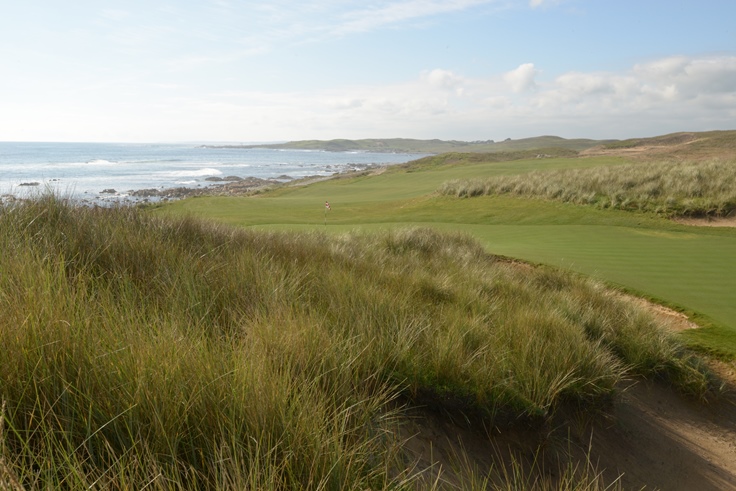 A new world-class links golf course under construction on King Island will become the first in Australia to benefit from the installation of new generation sprinkler technology developed by Toro. Ocean Dunes will be a spectacular play-and-stay links development hugging the west coast of King Island, between Victoria and Tasmania, overlooking the Great Southern Ocean.

The course itself covers 115 hectares of rolling dunes and ocean views with holes designed to challenge golfers of all levels, including two challenging par threes that require players to hit over the surging ocean. The first nine holes are expected to be open late this year, with the entire 18 holes completed by late 2015. The development includes a club house, restaurant and on-site accommodation.

Ocean Dunes is being designed and overseen by one of Australia’s best known golf course architects, Graeme Grant, the former Course Superintendent at Kingston Heath Golf Club in Melbourne and a former director of Newton Grant & Spencer.

Mr Grant said the west coast of King Island was an ideal location for a links style course. “I have been in the golf industry for 47 years and the west coast of King Island is as close to the Scottish or Irish links course conditions that I have seen in Australia,” he said.  “Ocean Dunes has the potential to be a world-class course. The dunes are spectacular and every hole has a view of the ocean.”

Mr Grant said the Toro® INFINITY™ sprinklers offered a number of advantages which made them a logical choice for the course. “If something goes wrong with the sprinklers or decoders, they can be serviced from the top, rather than having to dig up the course to access them,” he said.  “This means less interruption for players because of sprinkler repairs, replacements and scarred turf. “The trajectory of the main nozzle can also be adjusted, which is a huge advantage, given the coastal winds on the course.”

Mr Grant said he expected around 1200 sprinklers would be installed by the time the course was completed. Other specialist Toro equipment, including multi-sprayers and mowers, are also being used during the development phase and will be used for course maintenance once it has been completed.

“Effectively, once the sprinklers have been installed, there is no need to dig them up again as everything can be accessed from the top,” he said. “Serviceability down the track has been a key concern when deciding what equipment to use, which is where this equipment shines.  The INFINITY™ sprinklers also allow for the addition of new technology into the future when the course is up and operating.”

Mr Williams said Toro had a long-standing relationship with a number of the principals behind the Ocean Dunes development, which had been another significant reason that Toro had been chosen to provide the required irrigation and commercial mowing equipment. He said Ocean Dunes was the first major course development to use INFINITY™ sprinklers from the outset, although the sprinklers were being retrofitted into a number of other courses around Australia.